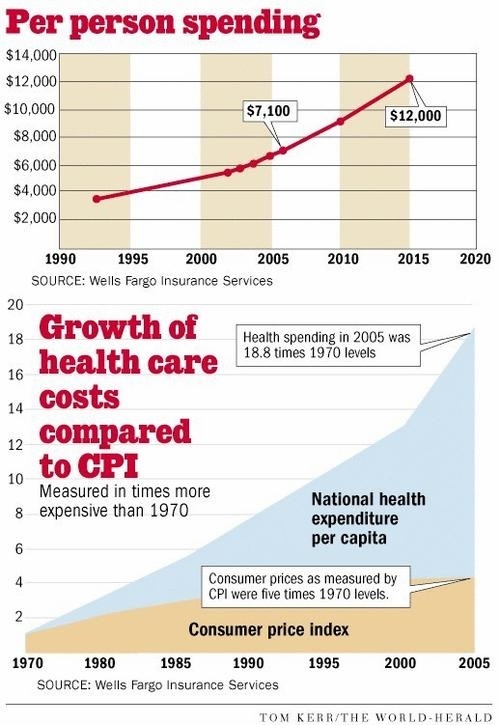 The reason medical care costs today are so high is because the government has become more involved in the industry and has raised the cost for all of us.
Before WWII and for all of American history before that, people paid their own medical bills with for the most part no problem. At least there was no crisis as we have today. There will always be poor people and they can and should turn to charity for help. In the old days there was no such thing as health insurance. People paid their doctor bills. Health insurance came about as a way for people not to pay their doctor bills but to recover wages lost during times they were sick. Lost time from work was a bigger financial problem than the bills themselves. Originally, “health insurance” was more like what today would be called disability insurance.

Since the individual usually does not pay for their medical expenses, doctors make more money doing multiple tests. They get paid more for that, too. But the government and HMO’s often refuse to pay the full price. So, doctors get paid less than they expected on the procedures they do, and so they look to everybody else to pick up the difference. This difference is paid for by individuals with their own health insurance and those who pay cash. It is estimated that people paying cash pay 2- 3 times the amount that the federal government does for the same things. And this more than anything else is why health care costs are so high today.

In our medical system one side dictates the terms, and the other side must take it or leave it. But the terms are not known up front. So, the person taking it has no idea what they are taking. Most medical bills are not contracts at all. A contract requires a “meeting of the minds.” If a doctor does not tell a patient (a) what will be done or (b) how much it will cost, then there is no meeting of the minds. Today, there are more and more clinics actually publishing their rates. A person could use those prices as a good faith method of determining a fair price to pay. One doctor running such a clinic stated that he originally thought his costs would be 1/2 of what other doctors were charging. He really had no idea because he never had control over costs. What he found was that his costs are actually 1/8 of the costs of doctors who get paid by traditional means. So, the health care industry is costing 8 times what would be the case in a free market.

I have had a life long love affair with the New York Yankees and baseball period. In my retirement I've discovered the hobby of sports game simulation through online gaming. I also have collected cards and memorabilia since I was 7 years old in 1961. I inherited from my uncle the collections starting from 1956 - 1960 and in 1961 I started my own collecting. I started an online league through Out Of The Park Development and their game OOTP16. The name of the league is the Alternate History Baseball League and it began in the 1954 baseball season when I and fifteen others held an inaugural draft and began the AHBL league in earnest. In my blog I will review the AHBL league and also mix some pop culture and historic events from real life. I hope you enjoy !
View all posts by Commish Greg →
This entry was posted in Conservative, Empire, Finance, Liberatarian, National Debt, Opinion, Politics, State and tagged affordable care act, health care, obamacare. Bookmark the permalink.