Who Are The Brain Police? 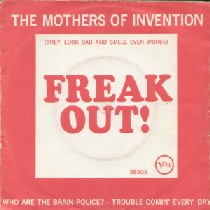 In the mid-1960s a band known as the Mothers of Invention was an American rock band from California led by the self-taught composer and performer Frank Zappa. His diverse musical influences led him to create music marked with experimentation, innovative art an elaborate live shows. Zappa founded the band in 1964 by releasing the Mothers debut album, Freak Out! Frank Zappa and his band the mothers became outspoken performers that music and lyrics that enunciated freedom of thought and expression. In the 1960s rock music became a method of free expression against racism, for sexual freedom and the rejection of the limiting societal norms of the times. So you ask how could any of this be relevant today. Well, in current times Americans still face problems of race, sex, expression and though different societal norms.

Insofar as race is concerned in 1964 a great movement and civil rights was beginning to have a great impact over racism in America. The civil rights movement made great strides in the 1960s to help create equal opportunity for all Americans. Now however, almost 50 years later we are faced with a new kind of racial barrier that prevents any honest discussion of race for fear of being called racist. While white people generally whisper and tiptoe whether it is appropriate to use the term black, Afro-American, African-American or person of color actually becomes part of the problem. We fear speech and we fear self-expression and honest communication lest we be called racist.

In 1964 those who had sexual relations outside of marriage were thought to be promiscuous at the least and controversial for the most part. People who had gender identification issues or were homosexual were thought to be strange or even disturbed, but definitely not normal. Today we are faced with a different kind of discrimination as acceptance of transgender and homosexual behavior becomes wider in society. It has become a bigoted display today to even question whether transgender and homosexual behavior is ethical or moral on religious grounds because any thoughtful person wouldn’t be so bigoted. This kind of new thinking stifles any free expression of thought and honest communication. So we don’t discuss any longer in America, we draw lines in the separate each other into definitive groups who are either with it or are bigots. Sadly the idea of religious expression has become in our society the ignorance of the masses.

So what does all this have to do with Frank Zappa and the mothers of invention? In the mothers debut album Zappa one of the song titles was “who are the brain police?” In which Zappa was joined by Ray Collins on lead vocals, Jimmy Carl Black on drums, Roy Estrada on base and boy soprano and Elliott Ingber on lead guitar. In the song the singer poses “what will you do when the label comes off, and the plastics all melted, and the chrome is too soft?” It goes on to a terrifying screeching almost screaming “I think I’m going to die, I think I’m going to die, who are the brain police?” At the end of the song the singular poses “what will you do to people you knew were the plastic that melted, and the chromium too? Who are the brain police?” Most people who hear the song are definitely freaked out and often even scared. Some feel that the song is about a murder and that the police can’t figure out who did it and they subscribe different meanings to the plastic being melted and the chrome being too soft and the label coming off. The references to I’m going to die are ascribed to the murder victim. In all probability the real meaning and something that Zappa often satirizes is the stuff being fed to society by the establishment. Zappa points out things like chrome, plastic and labels which are all important products of industry make things cheaper to create and lack in quality. The idea is that ultimately nothing would happen if we didn’t have these wonderful items sold us by big business

The singer of the song is the authoritative figure talking to us, someone who’s escaped the psychological prison of labels that are placed upon us from birth and all the propaganda that is forced upon us daily. The Orwellian connection in which the thought police liquidate those who are deemed guilty of “thought crime”. Zappa was drawing parallels in the conformity of the 1960s that we could draw once again today. So with regard to free expression and accepted societal norms of today many of us leaning right and political thought feel stifled by a new form of speech deprivation. The song who are the brain police is about someone who has broken away from society and doesn’t know what to do because all are expected to live within the confines of society. I find it interesting that almost 50 years ago I was along with people like Frank Zappa a liberal, commie, pinko whose expression was stifled. And 50 years later I am a conservative, fascist, racist whose expression continues to be stifled. We will never move forward in society one free expression and honest thought and communication are suppressed, we must never fear any open exchange of ideas for it is this free speech that truly makes us free.

I have had a life long love affair with the New York Yankees and baseball period. In my retirement I've discovered the hobby of sports game simulation through online gaming. I also have collected cards and memorabilia since I was 7 years old in 1961. I inherited from my uncle the collections starting from 1956 - 1960 and in 1961 I started my own collecting. I started an online league through Out Of The Park Development and their game OOTP16. The name of the league is the Alternate History Baseball League and it began in the 1954 baseball season when I and fifteen others held an inaugural draft and began the AHBL league in earnest. In my blog I will review the AHBL league and also mix some pop culture and historic events from real life. I hope you enjoy !
View all posts by Commish Greg →
This entry was posted in Conservative, Entertainment, Nanny State, Opinion, Politics, Rock 'n Roll, State and tagged frank zappa, free expression, free speech, homosexual, mother of invention, mothers, racism, sexual freedom, transgender, who are the brain police. Bookmark the permalink.

1 Response to Who Are The Brain Police?