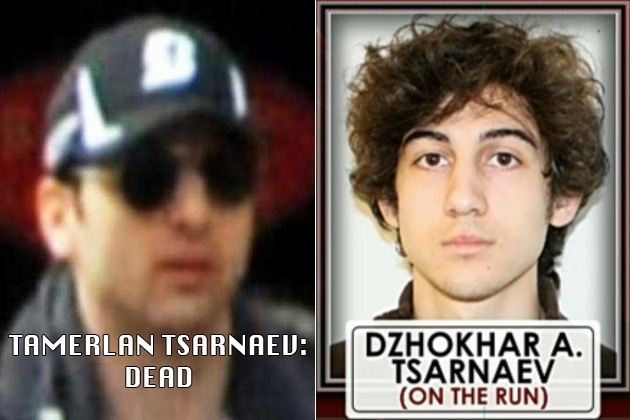 Marathon bomber met six times with Chechen Islamic jihadist leader; FBI “dropped the ball”
“This is the latest in a series of cases like this…where the FBI is given information about someone as being a potential terrorist; they look at them, and then they don’t take action, and then they go out and commit murders.” This is a direct result of the Obama Administration jettisoning all truthful information about Islamic jihad from training material. If Republicans had an ounce of sense, they would be making this an issue now, and launching an investigation into how much this politically correct obfuscation is costing us. And Leftist pseudo-journalist Spencer Ackerman, who started the ball rolling on this denial of the truth, ought to be ridiculed as roundly and held in as much contempt as Neville Chamberlain.
“Boston bomber: FBI ‘dropped the ball’ over Tamerlan Tsarnaev,” by Peter Foster for the Telegraph, April 21:
The FBI was alerted by Russia’s security services to serious new concerns about one of the Boston bomb suspects as recently as last November, it was claimed on Sunday night.
As the agency was accused of “dropping the ball” over the case, NBC News reported that Tamerlan Tsarnaev had been seen making six visits to a known Islamic militant in a mosque in the Russian republic of Dagestan.

The visits came during a six month trip that Tamerlan made to the city of Makhachkala to see his family, NBC said.

According to a local police official, a case file on Tsarnaev was then handed over to the FBI along with a request for further information. However, the FBI never replied.

The agency has already admitted that it interviewed Tamerlan Tsarnaev in 2011 after Russia raised concerns that he was becoming a follower of radical Islam, but found nothing “derogatory” against him and did not pursue the case further.

The 26-year-old, who allegedly orchestrated last Monday’s bombings with his younger brother Dzhokhar, was killed in the early hours of Friday morning in a shootout with police. It came just hours after police released images of the pair to the public.

In a further twist, Channel 4 News claimed on Sunday that Tamerlan had phoned home in the wake of the bombings and told his mother that the FBI had already called him to accuse him of being responsible.

According to the report, Tamerlan telephoned his mother on Wednesday last week and said he had replied to the FBI’s accusations by saying: “That’s your problem”. The claims emerged from an interview with his father, Ansor.

The FBI declined to comment directly on either claim on Sunday.

However, if either is confirmed, they will add significant weight to the growing chorus of criticism of the FBI, which came on Sunday from senior members of Congress who accused the Bureau of repeatedly “dropping the ball”….

In a further sign that Tsarnaev’s record was in the US security apparatus, the New York Times reported yesterday that a “hold” had been placed on his citizenship request by the Department of Homeland Security after routine background checks discovered the FBI’s former interest in him.

The FBI has also not explained why it did not immediately retrieve the Tsarnaev file after the bombs exploded on Monday afternoon – an event which should have triggered routine checks on those suspected of involvement in with Islamist militant groups.

Even when three days later, when the FBI correctly identified the bombers after reviewing hours of the CCTV footage and public smartphone videos of the race, they failed to cross-reference the photograph with a man whose picture they already had on file.

When contacted by The Daily Telegraph to ask why Tamerlan’s file had been overlooked in the aftermath of the bombings, the FBI said it would not comment on “operational matters”….

Another Republican, congressman Peter King, chairman of the House sub-committee on Counterterrorism and Intelligence, was even more direct, accusing the FBI of having a track-record of failure in monitoring potential terror threats.

“This is at least the fifth case I’m aware of where the FBI has failed to stop someone,” Mr King told Fox News, citing cases including that of Anwar al-Awlaki, who planned terrorist attacks as part of al Qaeda and Nidal Malik Hasan, who opened fire at Fort Hood, Texas, in 2009 killing 13 people.

“This is the latest in a series of cases like this…where the FBI is given information about someone as being a potential terrorist; they look at them, and then they don’t take action, and then they go out and commit murders.

I have had a life long love affair with the New York Yankees and baseball period. In my retirement I've discovered the hobby of sports game simulation through online gaming. I also have collected cards and memorabilia since I was 7 years old in 1961. I inherited from my uncle the collections starting from 1956 - 1960 and in 1961 I started my own collecting. I started an online league through Out Of The Park Development and their game OOTP16. The name of the league is the Alternate History Baseball League and it began in the 1954 baseball season when I and fifteen others held an inaugural draft and began the AHBL league in earnest. In my blog I will review the AHBL league and also mix some pop culture and historic events from real life. I hope you enjoy !
View all posts by Commish Greg →
This entry was posted in Conservative, News, Opinion, World News and tagged bombs. Terrorist, FBI, jihad, Marathon bomber, terrorism. Bookmark the permalink.