Suicide of a Super Power 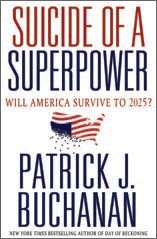 According to Pat Buchanan in his great work THE SUICIDE of a SUPER POWER, America is being transformed into a multiracial, multicultural, multilingual, multiethnic stew of a nation that has no successful precedent in the history of the world. The United States now lacks a common culture and a set of values most folks can agree on. Our nation appears to be hopelessly divided on many different fronts. Racially, we are more segregated today than we were in the 1970’s.

What ever happened to Dr. Martin Luther King”s vision of the “Beloved Community” which was essentially “a completely integrated society, a community of love and justice wherein brotherhood would be an actuality in all of social life?” If we as a society claim to love “diversity” so much why has America turned its back on the dream of Dr. King and chosen to seperate and segregate themselves from each other?

Pat Buchanan offers a view of the disintegration of a great american society. One that has crumpled and been replaced by a Balkanized new America. The America which was truly a land of the free and the home of the brave has passed away.

I have had a life long love affair with the New York Yankees and baseball period. In my retirement I've discovered the hobby of sports game simulation through online gaming. I also have collected cards and memorabilia since I was 7 years old in 1961. I inherited from my uncle the collections starting from 1956 - 1960 and in 1961 I started my own collecting. I started an online league through Out Of The Park Development and their game OOTP16. The name of the league is the Alternate History Baseball League and it began in the 1954 baseball season when I and fifteen others held an inaugural draft and began the AHBL league in earnest. In my blog I will review the AHBL league and also mix some pop culture and historic events from real life. I hope you enjoy !
View all posts by Commish Greg →
This entry was posted in Books, Conservative, History, Opinion, Politics and tagged Buchanan, diversity, integration, pat, segregation, Suicide, super power. Bookmark the permalink.