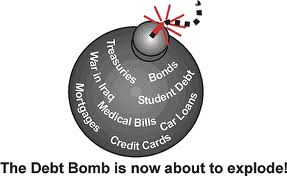 Senator Tom Coburn’s new book the that bottom,The Debt Bomb speaks of the big question facing America is not was going to win the next election but whether we can defuse a debt bomb that has put at risk our very survival. History has shown time after time that debt can bring great nations to their knees. Throughout history And powers such as Egypt, Rome, Spain, France, the Ottomans, Britain and the Soviet Union. All these great powers had declined economically before they collapsed.

Our founders knew this history as we recall John Adams warning: “democracy never lasts long. It soon wastes, exhausts and murders itself. There was never a democracy yet that did not commit suicide.” History also shows that great nations can come to an end quickly like a thief in the night. Unfortunately most of our political ruling class is downplaying the threat. We have an administration that insists that our debt load is not hurting our economy. There are centuries of evidence that illustrate the dangers of carrying such a high debt load.

Our debt now exceeds the size of our entire economy and is presently creating a major drag on our economy. Our administration continues to ignore the fact that we’ve received a credit downgrade specifically because of our refusal to reduce our long-term debt. Both sides are to blame and both are at fault but those who fight serious deficit reduction are most at fault. There is no doubt that our combination of excess of entitlement programs, military spending, waste and fraud is what is killing us.

There is no doubt a consensus for a solution does exist in the country and in Washington. In spite of the political posturing on both sides privately members of our ruling class are in agreement about the magnitude of the fiscal challenges we face. It comes down to political will and the courage of conviction and as Senator Coburn puts it will we be career politicians, or will we be statesman?

I have had a life long love affair with the New York Yankees and baseball period. In my retirement I've discovered the hobby of sports game simulation through online gaming. I also have collected cards and memorabilia since I was 7 years old in 1961. I inherited from my uncle the collections starting from 1956 - 1960 and in 1961 I started my own collecting. I started an online league through Out Of The Park Development and their game OOTP16. The name of the league is the Alternate History Baseball League and it began in the 1954 baseball season when I and fifteen others held an inaugural draft and began the AHBL league in earnest. In my blog I will review the AHBL league and also mix some pop culture and historic events from real life. I hope you enjoy !
View all posts by Commish Greg →
This entry was posted in Conservative, Empire, Finance, Liberal, Liberatarian, Nanny State, National Debt, Opinion, Politics, State, Taxes, Tea Party, Welfare and tagged bomb, budget, cost, debt, decline of empire, defusing the debt bomb, entitlements, inflation, military, Taxes, welfare. Bookmark the permalink.