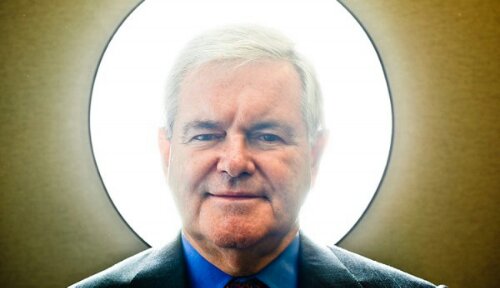 Yes you read that correctly, the newt Reagan. As the campaign progresses it’s becoming more clear day by day that it is Newt Gingrich that is the heir to Ronald Reagan and his legacy for smaller government and the restoration of liberty as well.
When we look at the field we see that the flavor of the week Herman Cain, while getting many people excited in the tea party is flawed as another possible president with no experience. We’ve seen this show before with the outsiders of Obama, Bush and Clinton we’ve had twenty years of on the job training. With Romney we get experience and capability without any real conviction. This is also not the direction that we want to go in as a nation. Ron Paul is a breath of fresh air with the best ideas, but unfortunately no chance to get elected. Finally Rick Perry shows a man who is clearly not ready for prime time.

So we turn to Newt Gingrich and when we do we see a man who is confident, brilliant,  experienced with a track record of success having been the last speaker of the House to be responsible for four balanced budgets in a row. As we turn to Gingrich and listen to his common sense ideas and conservative ideology we see in him the heir to the Reagan legacy.

With all of this in mind I have to announce that I am now 100% behind the election of Newt Gingrich to unseat President Obama and restore liberty as well as a struggling economy for America. Help us once again to become as Reagan might have said that shining city on a hill.

I have had a life long love affair with the New York Yankees and baseball period. In my retirement I've discovered the hobby of sports game simulation through online gaming. I also have collected cards and memorabilia since I was 7 years old in 1961. I inherited from my uncle the collections starting from 1956 - 1960 and in 1961 I started my own collecting. I started an online league through Out Of The Park Development and their game OOTP16. The name of the league is the Alternate History Baseball League and it began in the 1954 baseball season when I and fifteen others held an inaugural draft and began the AHBL league in earnest. In my blog I will review the AHBL league and also mix some pop culture and historic events from real life. I hope you enjoy !
View all posts by Commish Greg →
This entry was posted in Empire, History, Nanny State, National Debt, Opinion, Taxes and tagged 2012, election, Gingrich, newt, president, Reagan. Bookmark the permalink.