Our National Debt IS About To Swallow Us! 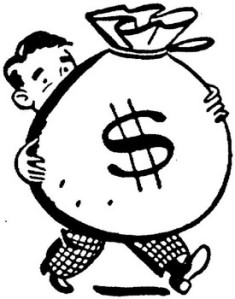 Our huge national debt is about to swallow us whole. We used to talk in terms of millions of dollars for a very long time. Then it seemed in the 1990’s we started talking in billions of dollars and now in the past few years we’re talking in Trillions of dollars. President Obama didn’t invent deficit spending even though he may have exacerbated it, he certainly didn’t do it by himself. He had help from democrats and republicans both who can share in the blame for our crisis. The first dramatic growth spurt of the debt occurred during the Civil War. The debt was just $65 million in 1860 and reached $2.7 billion following the war. The debt slowly fluctuated for the rest of the century, finally growing steadily in the 1910s and 1920s to roughly $22 billion as the country paid for involvement in World War I. The buildup and involvement in World War II plus social programs during the Roosevelt and Truman presidencies in the 1930s and 40s caused a sixteen fold increase in the gross debt from $16 billion in 1930 to $260 billion in 1950.
After this period, the growth of the gross debt closely matched the rate of inflation where it tripled in size from $260 billion in 1950 to around $909 billion in 1980. With the programs of the Great Society and our welfare state, Vietnam, the Middle East, the Arms race and Iraq and Afghanistan the debt as soared out of control.
In nominal dollars the public debt rose and then fell between 1992 and 2000 from $3 Trillion in 1992 to $3.4 Trillion in 2000. During the administration of President George W. Bush, the debt increased from $5 trillion in 2001 to over 10 trillion by 2008, rising from 57% of GDP to 74% of GDP. The Congressional Budget Office estimated in March 2009 that under the Obama administration public debt would rise from 70% of GDP in 2008 to 100% in 2012.
No wonder that our debt is out of control when our politicians use the budget for the express purpose of bribing the American public. Of course Congress and the president do this so that they can get elected and re elected to office.
Our percent of debt as it relates to GDP was around 50% when Ronald Reagan was in office, but it hasn’t been lower than 60% since 2003 under George W. Bush. Since the War on Terror, Economic upheaval and out of control spending by Congress through bailouts and the rest we’re headed into 100% of GDP. Each American citizen man woman and child owes close to $50,000 each toward our national debt.
We can’t say on one hand we want to spend more on social programs and cut the budget on the other hand. Just like at our own homes we need to reduce all spending when we have an economic crisis and there must be no sacred cows. Forget politics as usual and cut the budget otherwise our whole economic system may very well collapse as we know it. As we get more productive in the economy debt as a share of GDP will reduce. We have a duty to our children and grandchildren to leave them a better world, as our parents and grand parents did for us. Stop the blame game, roll up your shirt sleeves and get to work!

I have had a life long love affair with the New York Yankees and baseball period. In my retirement I've discovered the hobby of sports game simulation through online gaming. I also have collected cards and memorabilia since I was 7 years old in 1961. I inherited from my uncle the collections starting from 1956 - 1960 and in 1961 I started my own collecting. I started an online league through Out Of The Park Development and their game OOTP16. The name of the league is the Alternate History Baseball League and it began in the 1954 baseball season when I and fifteen others held an inaugural draft and began the AHBL league in earnest. In my blog I will review the AHBL league and also mix some pop culture and historic events from real life. I hope you enjoy !
View all posts by Commish Greg →
This entry was posted in Nanny State, National Debt, Opinion, State, Taxes, Welfare. Bookmark the permalink.